The use of mushrooms for medicinal purposes is historically more associated with Asian medicine than Western medicine.  As a rule of thumb, the Asian countries closer to Europe were less likely to use mushrooms.  China, Tibet and Japan are the countries most noted for cultivating and integrating mushrooms into their medicine.  There is little history of American Indians using mushrooms for food or medicinal purposes, nor are they used in American folk remedies. Continental Europeans used mushrooms for food, but there is little evidence of them being used as medicine.

Modern medical science has made tentative steps into the fungal world.  Examples are penicillin, from the Penicillium mold, and LSD from ergot, a grain fungi.  People tend to forget that the original reason for working with this fungi was for medicinal purposes in the mental helth field, not to "tune in, turn on and drop out."

Andrew Weil, Paul Stamets, Georges Halpern and others have advocated greater use of mushrooms for health purposes. While they may list clinical trials showing the results of specific mushrooms on particular diseases or health problems, the primary emphasis is on using certain mushrooms to build the immune system, or preventive medicine. Clinical trials tend to "Westernize" the use of the fungi.  Preventive medicine is somewhere between Eastern and Western medicine to my way of thinking.  However, I am not in the medical field, my terminal degree is in public policy, and is not health related.  If someone wishes to provide another perspective, my blog is available for such use.

The listing and explanation of the health benefits of a few medicinal mushrooms below, as well as advice about limiting quantities of Agaricus bisporus is from one of Andrew Weil's online newsletters (http://www.drweil.com/drw/u/TIP03192/4-Mushrooms-for-Health.html): 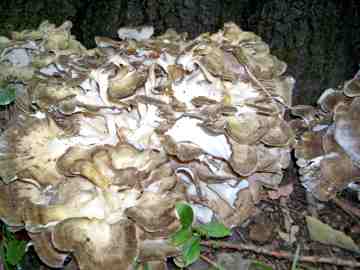 Grifola frondosa - Maitake or hen of the woods

Mushrooms are a big favorite of mine because they're delicious and often have medicinal properties. If you're not allergic and don't find them hard to digest, try these:

Note: I advise against the regular consumption of cultivated white or "button" mushrooms because they contain natural toxins that may act as carcinogens.